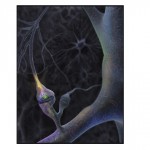 When we humans face the unknown we like to map it. Intrepid navigators mapped the continents, astronomers map the heavens, and molecular biologists map the genome. Mapping enthusiasts like large numbers, at least a billion items. The human genome has about three billion nucleotides. The human brain qualifies with a very comfortable margin to spare: 86 billion neurons. That number gets multiplied by about five or ten thousand when we count the total number of tiny “microprocessors” on each neuron called synapses. But keep counting: if each neuron is capable of 1000 signals per second then the brain is processing 100 trillion operations per second, not too far beyond Watson who processed 80 trillion operations per second to win at Jeopardy. To reach these staggering numbers, the fetal brain makes a half million new neurons per minute that migrate to their correct destinations and form connections with other neurons at the rate of two million per second. These numbers, as well as the burden of neurologic disease, may secure for the Brain Activity Mapping (BAM) project entry into the exclusive club of a national scientific challenge where it joins the moon mission and the human genome as lofty endeavors intended to capture the imagination of the nation. The mission will begin with developing the necessary tools, the nano-sensors that transmit massive data streams from the brain to novel information storage systems such as synthetic DNA rather than unwieldy and energetically wasteful server farms (euphemistically called clouds).

From the collective impulses that flash through brain circuitry in a baffling code emerge consciousness and perception, meaning and imagination, emotion and abstraction. Most of this activity involves the brain in conversation with itself. Only 10% of the synapses in the visual system carry incoming information directly from the external world. The work of the brain is to take a sensory input and distribute it around to other brain regions, mull it over, assign meaning and emotional valence. Brain activity is mostly an interior monologue. Implementing an action is the least of what the brain does; just picking up your coffee cup can be an immersion in an aroma, in mug design and memories. When a disease like Alzheimer’s takes potshots at the brain’s circuitry, and thoughts no longer link together and a paucity of memory causes imagination to dry up, the brain fails to engage itself. The saddest complaint that an Alzheimer patient ever said to me was, “I have nothing to think about.”

The brain uses its code to perceive objects and events and experiences that came into existence long after the invention of the brain. We can make sense of a moonwalk or the theory of relativity, of Buckyballs or spiked heels without any historical experience.  The versatility of the brain is its capacity to encode novelty. The initial step in the perception of novelty is to place the object of perception within an existing category. For example, when we meet a new person we know instantly that the visual impression should be stored in the face category. Brain activity maps will tells us the boundaries of these brain perceptual units and how categories blur and get re-defined.

Just as language has the versatility to express novel human thoughts independently of any specific language or any specific moment in time, within the vast system of brain connections lies the capacity to form every human thought, past and future. The brain encodes the future in potential patterns of activity, some of them have not yet occurred in any human being, others will use existing activity patterns for new meaning. And just as we sometimes feel that we have reached the limit of language, that the words do not exist to express our thoughts adequately, so the limits on brain activity lie at the boundary of our survival amidst the innumerable, often threatening circumstances we face.

The variety of individual genomes has revealed unexpected human diversity. Individual variation in the brain is even greater than in the genome and to capture this variation brain activity maps of psychopaths and geniuses, of schizophrenics and yogis will all be informative. Compiling brain activity maps from many individuals will generate the cognome, an aggregate of all human thought. Be prepared though, because experiencing the semantic power of literature or the artistic vision of a great canvas will always stir us more than a representation of the corresponding brain activity map.  This is the difference between reading the score and listening to the music. Within the space between the acoustic features of sound and the evocative properties of the music lies an old and thorny problem, the mind-brain problem that has flummoxed every philosopher since Plato and Descartes. The issue is whether the intangibles of thought and feeling have some material basis in the brain? Herein lies the core mystery of the brain—we can see it and we will see it in ever greater detail, but like the unknowability of other people, we cannot know it.

As we probe more deeply into the brain, as into any unknown territory, fear surfaces. Science will not speak to these fears; science is silent about values. We decide how to use knowledge. On balance, modern medicine and technology seems to be bending toward a favorable arc. But the final score is not in yet—science has made no inroads in tackling some of our biggest problems like environmental degradation and global poverty. Perhaps it is in this realm, in the very matters that are critical to our survival, where we will see if the brain activity map has the capacity to make us a lot smarter than we are now.

1 thought on “Brain Activity Mapping: A Cartography of the Vast”